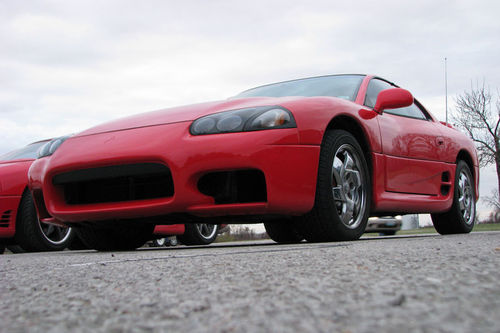 Flashback to October, 2005. I decided it was finally time to own a sports car. I had been driving trucks all my life, and my old beater had finaly died for the last time. I was ready for something flashy, and sexy, and maybe even a little quick. Long story short, I settled on 98 3000GT SL. I never imagined that there was a such a dedicated group of car enthusiasts, and being in the St. Louis area, I was right between two of the most noteworthy 3S mechanics anywhere, Von Morgan (xwire) and Eric Watters (VR440).

The first meet I went to with the STL crew, Von already had me talked into a single turbo setup on my SL, and I had only owned the car for two weeks! Fast forward to July 06, and the single turbo idea went by the wayside as Von called me up one day and said, "DUDE, you'll never believe this, I want to swap a 6G74 in your car instead!" He did an outstanding job and I still have people that don't believe it's not stock. Out of necessity came a fully rebuilt transmission from IPT a year later, as well as the 99 front end after a generous college student was gracious enough to donate a minor fender bender. Special thanks goes out to Eric as well for being nothing short of a superhero and helping me out of a jam with my transmission troubles.

Here it is a few years later, and the car has been nothing but awesome, not to mention all the great people I've met along the way. I went to the ECG in 07, and I had no idea how special that 3.5L motor was as just about everyone that walked past my car did a triple take. Then again at NG08 (Special thanks to Mobo for giving me permission to use the pictures) racing against Eric Bowden (SUTHNR) in the FWD Drags was even better. Finally, I can't mention enough how great The STL3S (STL-Tree-S) group is and how proud I am to be a member.