A J&S safeguard is a timing controller that I know of that retards individual cylinder timing to allow maximum timing per cylinder. At $600 for the control box and display its not cheap.

Using a single knock sensor, the system detects the onset of detonation and retards the timing on a per cylinder basis. A mode switch lets you select a maximum of either ten degrees or twenty degrees of knock retard. In the ten degree range, the unit retards one, two, or three degrees per ping. Double that for the twenty degree range. The system is always trying to re-advance to stock timing. In the ten degree mode, it re-advances at the rate of one degree every twenty revolutions. 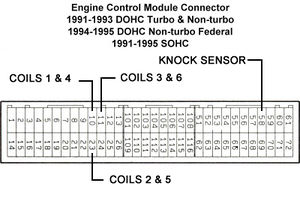 If you wish to preset and verify the amount of boost retard, temporarily connect a MityVac or equivalent hand pump to the brass fittting on the back of the unit.

To offset the agressive factory timing curve at high RPM, the unit has a RPM based tetard curve. Mode switches 3 and 4 allow you to select 0,2,4 or 6 degrees or RPM retard. See table below:

Assuming the boost exceeeds 4 psi, the retard begins at 5250 RPM, and increases linearly with RPM, and is all in by 6250 RPM

If boost is less than 2 psi, there is no RPM retard. Between 2psi and 4psi, proportional amounts

An additional amount of retard is added when the "Aux" pin (pin 2 of the harness connector) is switched to 12V. Mode switch S5 UP adds 4 Deg, DOWN adds only 2 Deg.

The "Aux" wire may be connected to a nitrous solenoid, or wire it to a "LOW OCTANE" switch. 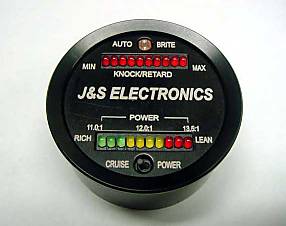 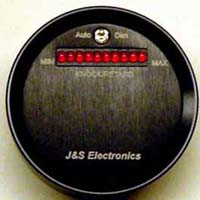 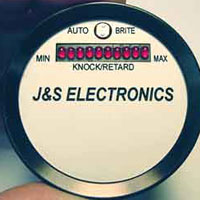 The guage on the left is a Dual Knock and Air/Fuel Ratio gauge. The other gauges are knock only.

Connect the Clear wire of the shielded cable to O2 signal, the Black wire to the O2 reference or Ground, and the bare shield wire to chassis ground. For 1 wire sensors connect both Black and Shield wires to ECU ground.

The safeguard has software to test the retard display. On power up you will see the display march up and back over a 2 second period. This tests the monitor, the cable and the connector. It also verifies that the software is up and running. The test is aborted if the key is moved to the start position.

The Air/Fuel section of the guage will work with any standard O2 sensor, though it is calibrated for a Bosch LSM-11 sensor operating at 1450 Deg F. The Air/Fuel ration displays the voltage produced by the O2 Sensor. With the switch set to "Cruise" mode the display reads from about .35V (lean) to about .96V (Rich). This mode is to help get your tune into the ballpark. When the mode is switched to "Power" the display "zooms in" to the critical range of 0.81V to .90V for fine tuning.