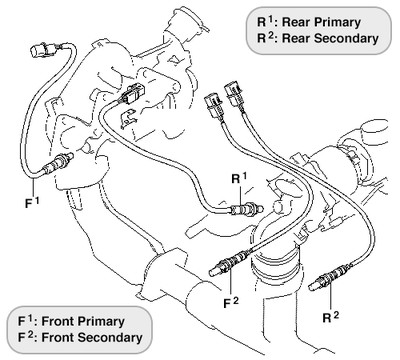 An oxygen sensor (also known as an O2 sensor or lambda sensor) is an electronic device that samples the gasses passed through the exhaust system in order to determine, in real time, if the air-fuel ratio of the engine is rich or lean. The sensors' purpose is to provide readings that will help the engine run efficiently and to produce as few emissions as possible.

The optimal air/fuel ratio that Mitsubishi 3000GT/GTO and Dodge Stealth's on regular gas aim for is 14.7:1. This is what is known as the stoichiometric mixture (depicted as 'Stoich' on most air/fuel gauges). These gauges generally consider the range of 13.0:1 to 17.0:1 to be 'Stoich', while anything below 13.0:1 is rich, and anything above 17.0:1 is considered lean.

As detailed in the diagram to the left, the Mitsubishi 3000GT/GTO and Dodge Stealth can have up to four oxygen sensors, depending on the year, model and if it is a California-spec or Federal-spec car.

When testing the voltage from an oxygen sensor, you can expect readings between 0.0 and 1.0. On the low end, 0.0 is a lean reading, while 1.0 is a rich reading.

During a cold engine start-up, the oxygen sensor output will show rich (voltage near 1.0). It will then likely transition to lean (voltage near 0.0) and slowly move toward the rich end again.

As the engine warms, usually when the coolant temp rises above 168° F, the voltage will quickly start to cycle (low to high to low to high, etc.). This is absolutely normal, as the ECU is reading the oxygen sensor's voltage in a closed-loop feedback and adjusting the pulse of the fuel injectors in an attempt to achieve the ideal 14.7:1 air/fuel ratio. It achieves this by increasing and decreasing the pulse as needed.

As the engine's RPM increases slowly, the cycling rate of the voltage will also become more rapid. However, if the engine RPM increases rapidly (while the car is stationary or while it is accelerating), the O2 sensors' voltage will indicate a rich condition (with a voltage around 0.8 or so). When the throttle is closed rapidly, the O2 sensors' voltage will show lean (voltage at or near 0.0) because the fuel injectors are being shut off by the ECU. At low-load cruising and light accelerating, the voltage should cycle between low and high.