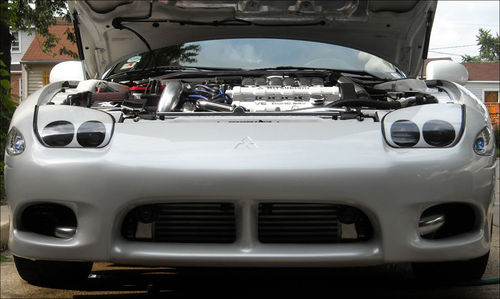 Ok, I'm up for ROTM again, 2 years later and quite a bit has changed. Still no dramatic how I found her at a junkyard seconds away from being crushed stories; just a well taken care of car bought by a responsible owner. Dan and myself still do all the work (or just me because SOMEONE lives in Iowa...) and the car still runs mid 12's at the track (though that should change next year, when I'm not racing in the crazy TN heat). I bought the car in 2005 with 31k miles on the clock and 4 and a half years later she has about 50k so I'm hoping to have this car for as long as gas stations sell 93 octane. My goal is still 400AWHP, but really I'd like to get into the 11's in the 1/4. The car was mostly stock when I bought it, and I've really only added minor appearance upgrades because these cars look so good from the factory. Plenty has been done to the rest of the car though. Oh, and 2 years ago I lied about being 'done' with modding this car but you know how that goes...

I've had this car since April of 2004, almost stock, and it's come a long way. Thanks to 3Si for the info that helped me do alot of things myself and A HUGE thanks to Dan "maddog" Dillon for all the hard work, and to Dan's dad for letting me borrow the driveway for so long last year, hehe. My goal is 400+ AWHP. After alot of ups and downs and many blown turbos, she's DONE! Of course there are few tweaks needed here and there and a good tune, but nothing major.I call that done :-)

I've had this car since April of 2004, almost stock, and it's come a long way. It's still not complete, but it's also for sale (I need to back to school and gets me an edjumacation), so I don't know that I'll ever get to finish it. Thanks to 3Si for the info that helped me do alot of things myself and A HUGE thanks to Dan "maddog" Dillon and Dave sLOw for all the hard work they put in, and to Dan's dad for letting me borrow the driveway for so long, hehe. My goal was 400 AWHP. Maybe I'll reach that next spring and won't let myself sell it...