This article will teach you how to replace the ECU, ECS and digital climate control capacitors in a Mitsubishi 3000GT/GTO and Dodge Stealth. This maintenance is particularly useful if your stock capacitors have started to leak, which can be considered a fairly common occurrence for our cars as the years pass by. Leaky capacitors are most likely to be found on first generation 3S's (1991 through 1993), but are not unheard of for later years as our cars advance in age.

The good news is replacing these capacitors requires minimal tools and only the essential electrical knowledge to complete. The replacement capacitors are relatively inexpensive (less than a dollar each) and are fairly easy to find as well.

When shopping for replacement capacitors, make sure that they're rated for operating temperatures between -55°C to 105°C (-131°F to 221°F). Also be aware that many retailers offer longer life capacitors as well (2000-3000 hour), which may cost slightly more, but are completely acceptable to use if you wish. 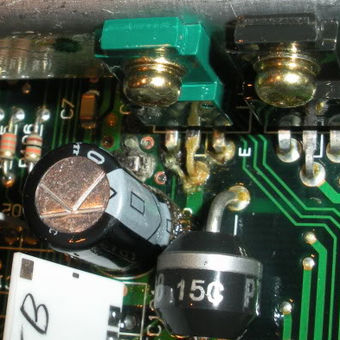 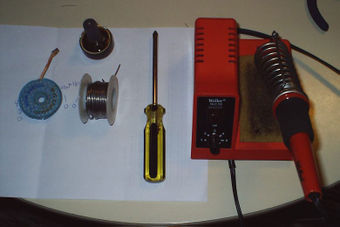 Most of the capacitors used in this tutorial were purchased from DigiKey.com using the listed part numbers below. Alternatively, some community members have also had luck finding similar capacitors on Parts-Express.com and Electronix.com, or locally as well (e.g. at Radio Shack).

Signs of a Bad Capacitor[edit]

How do you know if your capacitors have met their maker? There's a good chance you'll smell it -- it's not pleasant... unless you like the smell of rotting fish. For the digital climate control, you may notice that your screen no longer functions. Other even more obvious signs include the top of the capacitor bulging/cracked, and a corrosive goo spilled out below the capacitor. Terribly annoying reactions tend to happen when the capacitors in your ECU/ECM begin to leak; intermittent starting problems, car will run poorly/stutter, and may eventually completely shut down.

When in doubt, simply pull the unit in question, open it, and take a look around the circuit board. If you see yellowish gunk, or even if you want to preemptively strike an aging capacitor that might begin to leak, then you've come to the right place for help!

The image to the right shows the tools used for this guide.The desoldering braid wicker tape is the blue plastic circle thing with copper braid sticking out. The brown bottle is liquid flux (I initially used that to coat the wicker tape for easier sucking but I don't think it was necessary at all).

Other than that, in case you have other damaged components, here's some pictures of my display unit circuit boards for you to compare with.

Note: Another (more elaborate) version of this tutorial can be found here: How to Replace the ECU Capacitors in Your Mitsubishi 3000GT/GTO and Dodge Stealth