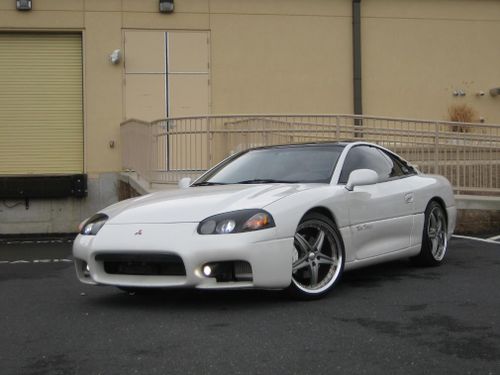 Back in 2001, I was riding my Zx-6R down a rather long and straight stretch of highway here in Central Pennsylvania at about 90mph. I happen to look behind me (could see for about 2 miles) and there was not one set of headlights to be found. No more than 10 seconds after that, a Black 1998 VR4 FLEW past me like I was standing still. It took me a moment to process what had just happened and to gather myself as I was severly shaken and needed a new pair of underware. Once I did, I knocked down 2 gears and took off after it. Followed him for about 10 minutes until he pulled into his drive way. As soon as he stepped out I said "hey man, what the hell is that!?". Until that time, I didn't even know these cars existed! He laughed and said "hop in!" Needless to say, I fell in love. I went home and found one online that was in California (94 RT/TT). Had it shipped over and blew it up 3 weeks after if arrived. It went from shop to shop as I had fell into my fair share of bad luck. After 4 years of it being passed around, I was introduced to Ray Pampena. 5 months after that I was set up with a 3.7L Pampena Special with DBB DR1200 Trubos and the rest of the works. But, before I was able to get the car out of there I was in a pretty bad Superbike racing accident at summit point. Shattered my foot. I could no longer work or pay my bills so the car, as awesome as it was, had to be sold.... But I could not get out of the game. My love was too great for these cars and the people that owned them. I found a 95 stealth for sale on here that looked JUST LIKE my last car... and it was afforadable with decent power .. so I bought it! Here she is!