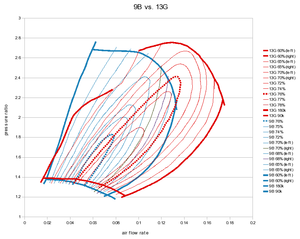 MHI compressor wheels are identified by a number representing size and a letter representing generation. Numbers such as 9, 13, 15 and 19 reflect the amount of air flowed at a specific pressure ratio and efficiency (e.g.- at 2.0 PR and 75% efficiency, the 9B flows 0.09 m/s^3, the 13G flows .13 m/s^3 and the 15G flows .15 m/s^3). The A series went out of production in the 80s and was replaced by the B and C series which gave way to the G series in the early 90s followed by the T series in the late 90s and early 00s. Each revision offers improved efficiency, flexibility and/or flow. For example, large yet lightweight composite construction enables the 13T wheel to deliver low flow performance rivaling the 13G and high flow performance rivaling the 15G with efficiency higher than both.

Compressor flow maps often use different scales to represent different efficiency contours at different resolutions, complicating comparison. The comparative charts below were created by digitizing the flow maps and graphing them in a spreadsheet. For the original flow maps and information on interpretation of flow maps, please visit Stealth316.