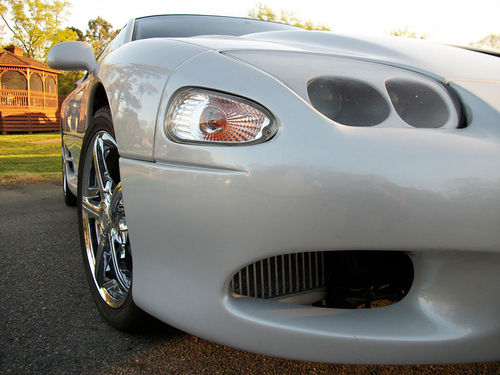 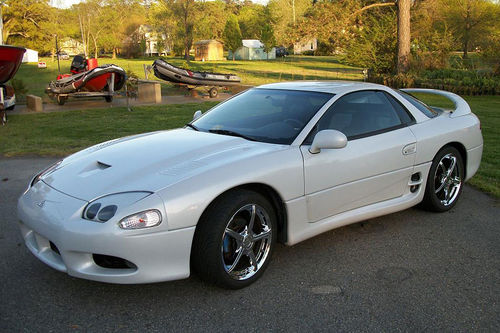 The car started it's life as a 94 Base model. I originaly bought it for a DD in August of 2003. It had been very well kept and was pretty much stock besides a cheap open filter. I started off with pretty much the same things most NAers do, test pipe, K&N, bought some polished engine parts. First thing to go was the stock rims, I think with a base, that's almost always the first thing to go :p Then I moved to th interior and bought leather from leatherseats.com. I put it in myself, we'll call that a learning experiance. I was one of the lucky ones and got quite a bit of interior aluminum parts from smokinvr4 before things started going downhill for that company. I lowered the car with Intrax springs and converted the body to a 97/98 style bumper/spoiler as well as a CF overlaid 575 hood and Deft Racing VLS. The TT conversion bug kept flying around and finally one day took what turned out to be a pretty big bite. I bought a car that had been converted but had a bad misfire. I stripped the car for what I could and used the conversion it had on mine. After we got it running it turned out the rear turbo was in pretty bad shape. I tried having it rebuilt but that didn't work out very well either. I decided to go ahead and make some changes at this point. I sold the VLS so I would have some cash to pick up a few things. I bought a set of 13T's from Beck, 450CC injectors, DSM side mounts and polished intercooler piping. Had the heads rebuilt, threw in 99 lifters and with a little bit of help got her running and back on the road. I also made a change from the 575 hood to a Victory hood. Since my August 06 ROTM win, I've only put 8000 miles on the car. It's been down and being worked on more than it's been on the road for the last 2 years, but it's finally at the point where I'm driving it when I want to now. The AWD conversion bug is flying around now, but it looks like that will be a few years down the road.

More pictures of my car http://www.3si.org/gallery/showgallery.php?cat=500&ppuser=15720

I know an NA has a hard time in the ROTM, but I'm giving it my best. I've had the car three years now and it has 91,000 miles on it. It was stock when I bought it, and I've done quite a bit of work to it since then. The car was well taken care of by the previous owners, so I've tried my best to do the same. It's not a daily driver anymore, (yeah, it's turned into a garage queen) but I get it out and run around as much as I can. I have around $7000 into the car since I bought it, none of that was in repairs, as the car has been solid for me. Mods are below, but pictures are worth a thousand words.