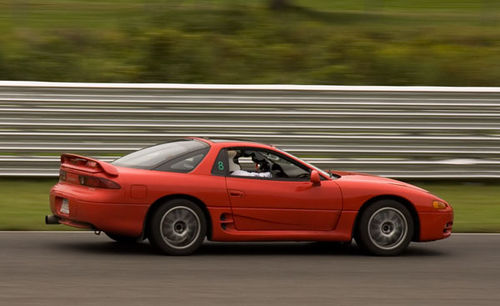 History of the Car:

I bought this car just over 4 years ago, I think. It was relatively stock and I wanted to slowly prepare it for roadcourses. I knew from the outset that I wanted to build the car, in a way, backwards, beginning with simple power modifications but focusing primarily on suspension and brakes.

About two years later, I decided that I wanted to have the simplest 3/S possible. I began a campaign to thoroughly rid the car of any unnecessary parts--a campaign that continues today but is near the end. When I was forced to tear the car down just over 2 years ago, I saw it not just as an opportunity to freshen up the engine, but to further simplify things. Over the years, I've had the opportunity to design, or contribute to the design, of a few exciting custom projects: the brake lines and the accessory belt mod most recently. I'm inexplicably amused every time I find a new part to remove. Recently I disassembled my steering wheel and removed my cruise control toggle in the parking lot of a Dunkin' Donuts, and smiled the whole time.

This past summer, I was finally confident enough in the car's condition and abilities to take it to road courses. It performed well at Lime Rock Park, especially considering that I was on mediocre tires. I also ran it at NHIS in fairly heavy rain. I was less satisfied that day, although I mostly blame my own inexperience.

Next season I'll be going back to Lime Rock and NHIS and taking a trip to Watkins Glen in New York. The car should be better suited to the Glen because it is a longer course better suited to higher-powered cars.