The clockspring on the Dodge Stealth and Mitsubishi 3000GT/GTO allows the steering wheel to be turned 360°+ and still keep the connection to the electrical components. This includes the horn, radio buttons, cruise control, and airbag. If any of these don't function or if more than one does not function your clockspring may be to blame. Most of the times the SRS light will come on but only a dealer can scan for this to see if it is in fact your clockspring.

DISCLAIMER: Serious injury can be a result of improper removal/installation techniques due to the airbag.

Please read all of these directions. They are a combination of the service manual and my own detailed findings. I am not responsible for an airbag going off. I used these directions and everthing went a-ok.

There are three key things to do in preparation of the clockspring replacement:

There is some pre-removal before you can start getting into the actual wheel. I found it easier to do it all at once before getting to wheel/airbag itself.

Remove the Airbag and Steering Wheel[edit]

Now you should have full access to the connections the clockspring makes in the dash area and we can begin removing the steering wheel.

Now you should be looking at the clockspring if everything is centered up nicely, the two marks should line up. Says nuetral and an arrow. In the picture below you'll see the word nuetral and an arrow pointing up to it. It is slightly off because to be perfectly neutral the wires would cover that up but just so you see what i'm talking about. What I noticed on my clockspring was what looked to be a piece of silver tape. I think this was taped when it's new to ensure the clockspring stays centered. Since I had two used pieces, I can not verify this. 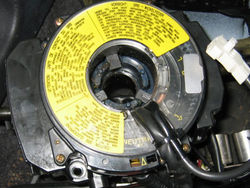 The clockspring on neutral

While you are placing the wheel back on make sure to install the plastic cap where the wires go through. Also the wheel should be straight, the clockspring should be in neutral, and those holes should line up. This will ensure proper clockspring alignment. After this is done, bolt on the split washer and nut. This is a good time to test operation. Jack the front of the car up so the wheels turn easily. Turn the wheel from side to side and listen for any binding sounds and make sure everything is operating properly.

You may now carefully reinstall the airbag making all the proper connections. Go ahead and reinstall the rest of the parts and reconnect the battery.

Your clockspring should now be functional.

This article originated from a page on Antoni's 3000GT/Stealth Website by Toni.
Retrieved from "https://www.3swiki.org/index.php?title=Steering:_Replace_Clockspring&oldid=3129"
Categories: