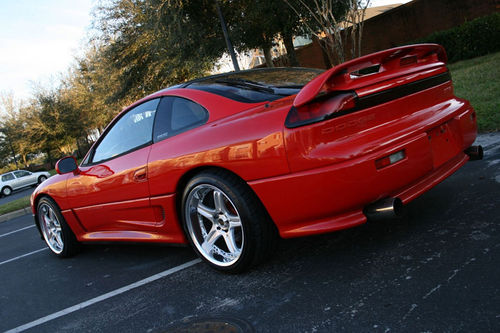 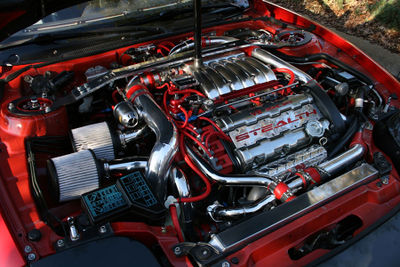 My addiction to 3000gts/Stealths all started with my first encounter with a Stealth when I was a teenager. I was traveling down to Fort Lauderdale with my family, when an electric blue 1st Gen Dodge Stealth flew past us on the interstate. I just remember I was awe struck and my Dad saying, "You'll want one of those." I was always into cars but I never knew the Stealth existed at that time. At that point, I fell in love with the 3/S. When I got home, I immediately started looking into the Stealth and checked out all of the specs. Since I was younger with little income, I knew I couldn't afford a Twin Turbo and it would be a while before I had one. But one day, I would have one.

So a few years down the road, I compromised and purchased a black 91' Dodge Stealth ES. I drove this car around through high school and it was a great car. It was very reliable and fast enough for a teenager. That is until disaster struck one week before I went to college. For some reason, I decided to take the intake plenum off to paint it, and upon reinstall, I dropped a washer down the intake manifold. The good thing is I didn't start the car. The bad thing is that I had NO idea how to get it out. I wasn’t very mechanically inclined at the time. So we took it over to a friend of my dad’s, and he was able pull the head off to get the washer. But he didn't know how to get it timed back up. It took a while to find someone to re-time it and after getting it all together, the oil pump failed on start-up and killed the bottom end within minutes. The same guy was able to rebuild the bottom end with a remanufactured crank and new bearings and all was well again. I continued to drive the car through college until I graduated and got an awesome consulting job making great money.

It didn't take me long before I was on the hunt for a Stealth Twin Turbo. I was looking for one in specific, an electric blue 1st Gen Dodge Stealth Twin Turbo. I searched for months and months and NOBODY was selling a Stealth that I was interested in. Then one day, a guy from 3Si noticed I was looking for a 1st Gen Stealth and sent me a PM. He had a red 93' Dodge Stealth TT that he was trying to get rid of. There were quite a few things wrong with it mechanically and cosmetically, and not to mention it was red. Not to mention, it was also in another state and had been in a recent fender bender. I really wasn't a big fan of red and wasn't looking forward to putting some work into it. But he was selling it for $7500 (which was in my price range) and I was getting really antsy to buy one. So I pulled a Carfax on it and it came up clean. I decided to take my g/f (wife now) with me to Kentucky to check out the car. So we rented a car and took a trip up there to take a look at it. The minute I saw it, something came over me and I bought it without even driving it. The color red was starting to grow on me really quickly. :)

All was great for the drive back to Florida. I was in bliss until the transfer case decided to lock up all 4 wheels on I-95 at 12:00 at night. It was a start to a wonderful relationship. After getting it towed to Gainesville to drop off my girlfriend/wife, the car was then towed to an Orlando Dodge dealership to get the transfer case replaced. I knew there was a recall and it was replaced without any hassle. Soon after, I moved to Daytona and used the car for a daily driver. Then I started to dump some money into fixing it up and installing some minor modifications. I fixed the metal damage the previous owner did and replaced most of the aging interior parts. I also put in some gauges and electronics and did some minor engine upgrades. The car was great, for a time......

One day, I was sitting at a stop light and noticed my oil gauge sitting at 4 PSI at idle. My face lost blood pressure and I probably looked like I had seen a ghost. I drove the car home and immediately drained the oil. You could have guessed it; there was a nice glitter in the oil. I knew at this point, it was time to throw in the towel, or so I thought. I towed the car to my parent's for storage and that same day, I purchased my Chevy Colorado for a dependable daily driver. I left the car to sit at my parents so I could figure out what I would do with it. In trade off, I gave the black 91' Stealth to my dad in compensation for rent (which he is still driving to this day). Then life decided to take me on another course. I got engaged to my girlfriend and I started saving all the money I could for the wedding. I was also in the middle of moving jobs and income wasn't too stable. Shortly after the wedding, life began to come around. I landed a good job and had a nice place to live. So naturally, my interests in the car were coming back. My new apartment had garages that I could rent, and so I decided to get one to rebuild the car from the ground up.

After doing quite a bit of thinking, I decided to start with a clean slate and I demanded for more horsepower. Instead of rebuilding the old block (this was before stroker kits), I was going to rebuild everything with new parts including overhauling the entire interior. I sold the old short block and got a great deal on a new OEM block and 60k mile OEM parts from Rockville. I had the heads rebuilt by a local shop with new VSS and cams and purchased all of the parts that are currently on my mod list. It took me 6 months to save and build up the engine. Since it was my first engine build, I took my time and made sure everything was 100% correct. After those long six months, it was time to start it over. Since my parents were a big part of this car, both emotionally and physically, I had them come up to see the first start up. I was pretty nervous but as the car started and roared to life, I knew I had finally built the car of my dreams.

After the start up, the car and I were still on a winding road, as it had developed a continuous amount of problems afterwards. The transfer case locked up yet again from the leaking seals. I’ve had numerous transmission leaks including both the input and output shafts seals. I had overheating issues due to the bigger manifolds and I also managed to burn up the VCU when my driver's side axle snapped. This in return, made me pull the transmission for the 3rd time in less than 1500 miles. (I am now able to pull the transmission in under an hour. Not bad eh?) When I started building the car, my philosophy was “If something broke, replace it with something better”. And so far, that’s what I have done. Even though the car and I have not seen eye to eye, I haven’t regretted the $ I have dumped into it, yet..... In the end, I feel that I have put together a car the right way and I feel good about the mods I have done. I also have a car that's fun and fast and is a great hobby for me. It also just recently put down great numbers on the dyno (521HP on pump 93 gas). I also just recently bought a helmet and will be taking it to the 1/4 mile here soon. So I'll be praying for some good numbers.

Overall, the knowledge I have learned from this car is irreplaceable and I wouldn’t trade it for anything. It's become such a big part of my life, that my wife even considers it part of the family now. Maybe one day, I'll be taking my kid to school in it. haha