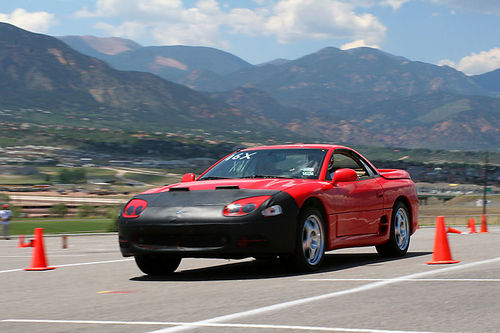 The Story of My Red 1996 Mitsubishi 3000GT SL Spyder: It was built in the 2nd week of June 1995. After years of searching I found my car in Springfield, MO. It had been garaged for 2 years post divorce by a lady who started it every Saturday but never drove it. Her 16 year old daughter was returning from an exchange program and wanted it as her first car. Lucky for me her mom didn't feel the same. She put it on EBAY first and had numerous scary calls of men saying they paypal'd her money and were coming to get it. (She didn't even have a paypal account). She pulled it from EBAY and moved on to autotrader. That is where we came in. Mark (DUTTCH) was always looking for me and found it the night she posted it. I called her the next day and we started corresponding for 3 days. She didn't want to take my offer at first. But then..... thank goodness for scary people in the world. She got a call that scared her and she called me and said if we came the next day it was MINE !!! We mapquested the trip from Dallas (which good old Mapquest said 365 miles) it was actually 425 miles. We hooked up the truck and trailer and headed out. Got to Springfield at 3am. Met her at 8am and found my beautiful car and it ran great too. Loaded it up for the longest 10 hour trip through driving rain, road constuction through Oklahoma and a 18 wheeler that blocked the road for an hour. By the time we got home I was sure my car was ruined from all the mud. I left it on the trailer and had Mark go out the next morning to check it. It was OK.

Since then we have gone chrome crazy and had more fun than anyone should in life.

For years previous we have been having fun with Marks VR4. But now over the last year and half we have gone crazy. The Spyder has been to the RMG in 2006, Both cars to the NG07, Oklahoma gathering 2007 and to car shows in town every weekend almost. It has autocrossed and drag racedin Colorado; Dyno'd this month in Texas (I felt really ill while it was winding up on the dyno) for a whopping 126 FWHp. Current best drags time 16.65 seconds. LOL.