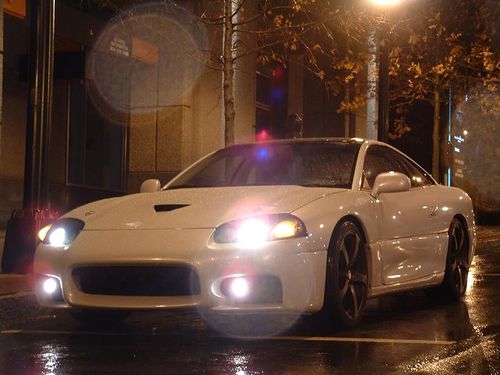 I've owned a 3/S since I turned 16 in 1996. I've been a member of the 3/S community since 1997. It started with Dragnet, then Starnet, then 3SI.org. My first gathering was in 1998 at a small airport north of Atlanta and it just grew from there. I started in a beautiful black 92 R/T that was totalled in 2000 when a soccer mom in a Surburban hit me head on. After 3 months of searching, I finally found my TT. A 1994 Grayish White Pearl Dodge Stealth RT TT. According to Joe G.'s 2nd Gen TT Production #s, my Stealth is 1 of 14 brought to the United States. I slowly started modding and learning my TT, went to gatherings all over the southeast and up to ECG in Maryland, made friends across the country, and contributed as much as I could back. Then last year in April mother nature decided that my car was a great target for hail. $7,500, months and months of driving around a Stealth "Sponsored by Titleist" & not backing down to insurance, I finally won the battle against State Farm. They wanted to to total out my car because of cosmetic damages. Many friends on 3SI helped me with their experiences, tips, and ways to get insurance to listen to me. The result was more than I could have imagined. My body shop that I've known for years was great with aftermarket parts, which resulted in cheaper than OEM parts in order for me to put more into the car. And this is where I stand now. Tons of great friends, something new to learn everyday, tons of knowledgable people to help with my problems, the chance to help others with my experience, and being able to deal with what I love daily ~ cars.