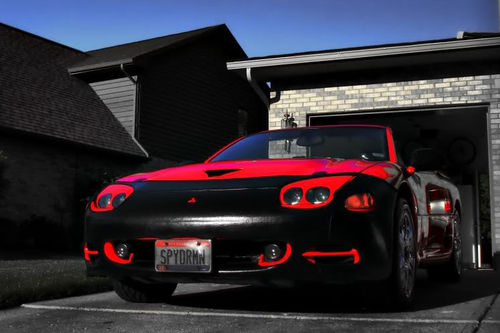 The problem got worse, when I felt the desire to go topless. All this talk of "Spyders" on the board was too much to ignore. When my wife asked (by email) what I wanted for my 44th birthday, my only response was a picture of a RED SPYDER VR4. Her response rocked my existance....."if you want it...get it...just sell yours first". Words only a junkie could appreciate.

My desire turned into a full fledged search and acquire mission, which lead me to Philadelphia, and my Black Beauty to Missouri. On February 23rd, 2001 I signed the papers for my baby at Conicelli Nissan (strangely enough), under the watchful eyes of my East Coast friends (Hans, Omar, Frank, Kevin and Jesse....thanks again you guys ( and girlie :-) ) . A quick post purchase party at King of Prussia HOOTERS (boy I hate when we go there) and I was back on the road home.

It is without a doubt, THE car of my dreams.

In the years since my May 2001 ROTM and 2001 ROTY wins the following upgrades have been made to the car (in no general order):

The car now has just over 103,000 miles on it and honestly looks better than the day I bought it.