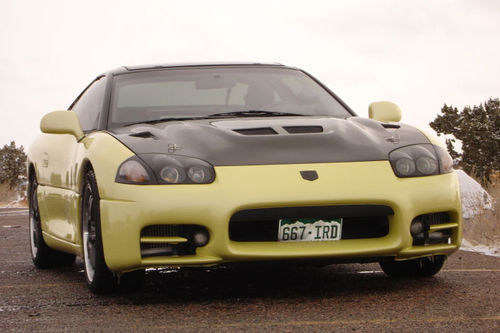 Story of me and my car, i bought it back in 2002, while i still had a 1991 R/T pearl white stealth, saw the yellow one and had to have it, not knowing anything about the car, i bought it and opened my wallet to it. In the first year of owner ship, it spent 6 1/2 months at a local Dodge dearlship getting the transfer case recall preformed, due to a error on there end, my toy got new transfer case, rear end, drive shaft, transmission, all new cv half shafts, all on the dearlship, car mostly sits 90% of the time unders its cover in the coner of the garage, i attend the Rocky Mountain Gathernings, i have placed 1st for best engine, which i am very proud of, all of my hard work pays off,i do most to all of the work on my car, with the help of chris black top TT on the forums, the car is very well know in my area, and has even so how to be ranked number one under pearl yellow steath in google images, even has made it to a few peoples myspace background from what i have been told...I love these cars, been a fan for almost a decade now, no plans to ever sell my toy ever...