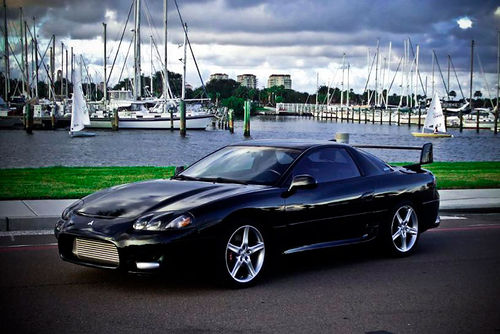 I bought this car in October of 2005, it was a completely stock green 1995 3000gt Base model with 161,xxx miles on it, the first thing I wanted to do was a 99 front end conversion and instead of just painting the bumper green, I decided I wanted the whole car to be black. After the paintjob I got my brand new wheels and tires. I bought basic mods like a test pipe and air filter and lowered it a little. I bought a twin turbo conversion kit off a member on 3si only to have the engine spin a bearing in December of 2006. I decided to buy a jdm Twin Turbo engine at that point. It took me several months to save money up for the engine and everything else I would need. I bought the engine from JDM of Miami and stripped it down to the shortblock and cleaned up everything and also did a 120k service as well as convert the transmission to fwd by welding the VCU. After getting the engine in the car I ran into problem after problem. The caps leaked in the ecu and that was what was causing most of the problems. I got that rebuilt and was good to go after that. I did all this in my driveway pretty much by myself with very limited tools. Since then I have done a mod here and there but not much because I have been broke. Future plans include an awd conversion and 16g's.