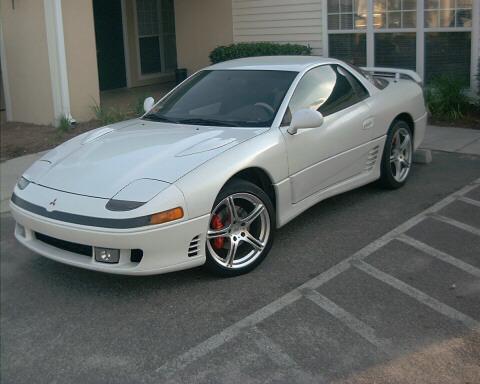 The search began a little over a year ago for the perfect sports car. My now, Brother in law had a 1992 Stealth rt/tt I absolutely fell in love with. But due to some financial problems, buying a house, he had to sell his beloved Stealth and unfortunately I didn't have the time or money to buy it from him. So the challenge began to find an awesome sports car performance wise, and one that could handle the daily submissions of a daily driver. I drove a number of cars before I found my soon to be beauty. I drove 4-5 Vr4's and Stealth TT's one of which the tranny and clutch blew while I was driving it...oops. Since my brother in law once had one he knew what to look for and what not to look for. But on June 5th of 2000, I drove up the long lonesome driveway to find......the one. A Pearl white 1991 Vr4 with 70k miles on it. I remember saying to myself, "please let this be the one." As I pulled up the owner walked out of his huge house. The owner, 60 yrs of age, a Dr at a local hospital, greeted me at the car. My first words were Wow!! To make a long story short I ended up getting a great deal and drove home that night with the car!!

When I first got it back I hadn't planned on any mods at all. Until one were day in July, I start it up and white smoke rolls out of the exhaust. Uh oh.. I drove it to the local Mitsu dealer only to find out that the rear turbo has a broken seal. Son of a Biscuit Eater!!!!! After searching for stock turbo replacements and having no luck, I spoke with Matt at AAM. We decided that the 13g's would be perfectly suited for my driving style. So this is where the Mod saga begins, next on the list was the Hks Supper Mega Flow and the Hks Evc 4. Then came the 18" Vr4 wheels. Next was the custom Apexi N1 exhaust system and the Hks 550cc injectors and Hks Vpc. All had all of these mods installed before the 2001 and as of now the only thing from the list that has stayed is the Exhaust and intake. Due to the cost of switching Universities and States I had to get rid of the mods to pay for much needed bills. But the Beast is slowly being built back. Now I have the following mods AAM 13g's, Hks SMF, Hks SSBOV, Hks TT V type 1, NGK Platiums, Accel Plug wires, Boostvalve Mbc, Supra Fuel Pump, 450cc injectors and Hks Super AFR (coming soon), Eibach Pro kit and KYB's, Autometer Instrumentation, Silver accented Interior, Momo Commando Steering Wheel, White Leather Accents, and I'm working on installing an all new audio system. I've been able to do all this on mine own while juggling a full time job and being a full time college student. I install all the hardware myself when time and tools are available. I thank you for your time and consideration. Have a good evening.