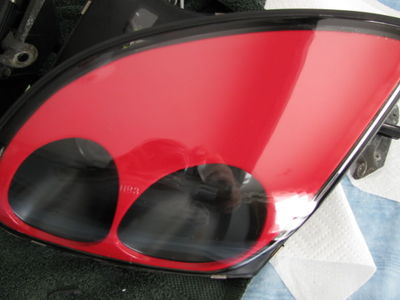 The glass projector headlights were only offered for one year during the Mitsubishi 3000GT/GTO and Dodge Stealth's lifespan, and that was in 1994. They are popular among enthusiasts for their rarity and sharp appearance, but more importantly because they don't flake on the surface like the 1995+ year plastic/lexan models do. However, the glass headlights aren't without their own set of flaws. Many owners have experienced fogging, moisture and/or condensation build-up under the lens of their headlights. No matter how much cleaning you do to the exterior of your headlights, this dew will remain seemingly just out of reach.

Before proceeding, you will need to determine if your headlight covers are made of glass or plastic/lexan. All 1994 Mitsubishi 3000GT/GTO and Dodge Stealth owners can assume their covers are glass (unless they've been replaced by a previous owner), while most 1995 and above owners will find their headlight covers are plastic/lexan. There have been some reported crossover between 1994-1995 as leftover headlights from 1994 may have been used on 1995 year vehicles. When in doubt, you can gently tap on the surface to get a pretty good idea on if they feel like glass or plastic. If they're plastic/lexan, check How to Clean Your Mitsubishi 3000GT/GTO or Dodge Stealth Plastic/Lexan Headlights. If they're glass, you're in the right place right here. 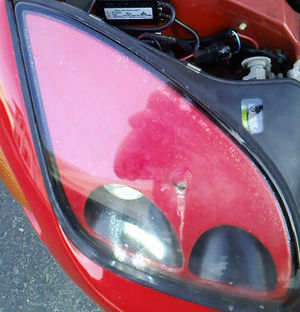 Cleaning the 94 (glass) headlights is a somewhat simple task, but time consuming. First, pre-heat your oven to 250 Degrees. Now remove the light bulbs from the back of the lights, remove the lights from the car. Clean all the crap off of the outside with a wet towel or something. Remove the stainless stell clips that hold the 2 peices of the light together by either using a screwdriver or needlenose pliers, I used the needlenose pliers b/c it was a bit easier. Place the light(s) in the oven for 5-10 minutes to soften the sealing compound that bonds the glass to the plastic, you have to kinda do this next part in a hurry, you might get your hands burned a bit, I used 2 oven mits, 2 small flat head screwdrivers, and a decent pocket knife, when you take the light out of the oven, obviously it's gonna be somewhat hot, but you have to get a screwdriver or knife inbetween the two and seperate them, I also had a razor blade to cut the bonding compound while I was separating it so I didnt have to really cleanup the glass from the bonding compound snapping back and sticking to the glass, be careful while separating so you dont chip the glass, remember these headlights are $900 each from the dealer (I think), when you separate the glass from the plastic, you will be able to clean both sides, the plastic part and the glass part, for the plastic, it shouldnt be that bad, so I would just clean with windex or something, for the glass, you might have to use steel wool, that's right, steel woll, it didnt scratch it for me or 2 other people around me, so you can test it for yourself, it worked great, and was a million times easier this way, I did however spray invisible glass which is a glass cleaner, and let it soak for about 5 mins before the liquid glass. After cleaning you can now re-assemble, you can just put them back together, and put them in the oven at the same temp for the same time, make sure you have the sealant off of the visible part of the glass (it's still gonna be on the mating surfaces) when you do this, after 5-10 mins in the oven again, take it back out and now push it together enough so that you can get the stainless steel clips back on, then I dont think you have to do this, but I put mine back in for another 5-10 mins just for good measure to make sure they were sealed enough, then put em back in the car, dont spray anything on them when they come out of the oven while they are hot, glass can crack when the temp drastically changes, just a heads up, i'm sure someone can elaborate more on this subject, but if anyone has any questions, you can pm me on 3SI or aim

On a side note. take out the projectors(two for each projector) and clean them as well to get the fog and gunk off them...takes an extra 5 mins but well worth it