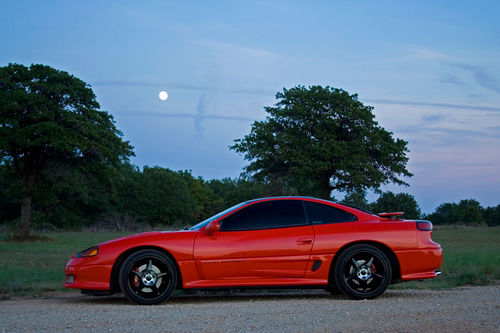 I bought my car in february of 04 and it's been an adventure ever since. My car was 99% stock when I bought it, it had a K&N filter that was it. It also had a leaking water pump when I bought it, which I replaced and then a few weeks later the timing belt tentioner siezed up, that bent 8 exhaust valves and 2 intake valves. I got that fixed and the car back on the road finally, then the mod bug got me. It started simple with an MBC and a boost gauge, which led to gutting all the cats. Then in late 04 I started getting a little bit more serious, I hotwired the fuel pump, bought some DSM 450's, a logger, and an HKS safr. Around early 05 my tranny was starting to become an issue, 3rd was grinding like crazy, and I was leaking tranny fluid like no other. I had read about the JDM gears around this time and I really liked the idea of shorter gears, and had always liked the idea of a six speed, so I decided I was going to do a 6 speed swap. The swap was fun, I ended up doing a bunch of things at the same time with the tranny. I put in some s.tech springs, welded up a full exhaust, DSM sidemounts, solid motors mounts, fidanza flywheel, UD Pulley. My car was coming along nicely. After I got all of that together I was enjoying the new mods, then for some reason my car started eating clutches, I killed 2 clutches before I found the cause of the problem, the inputshaft seal was trashed. Luckyly enough, I live about 15 minutes away from autocraft, so a couple of phonecalls and a short drive later I had a new input shaft bearing in my hands, and then my clutch problems were fixed. Then the road racing bug got me, I needed bigger tires, and bigger brakes. I soon upgraded to 2g front brakes and got some cobra rims. Around this time I also put in some DSM 13g's after reading up on how easy and cheap it was. I ran the 13g/9b combo for a while and it was alot of fun, but like everyone who was running the combo had said, as soon as you get one 13g, you'll have a 2nd one pretty soon after that, which I did after about 2 months of running the combo. Once summer 06 kicked in my car started to become a pain, my fidanza flywheel decided to eat itself at an autocross in april, and a month later I spun the #4 rod bearing, my car was done for a little bit. Around september I finally got all of the parts I needed to rebuild the engine, the rebuild went well and I had the car back on the road about a week after I had started putting the engine back together, 1400 miles after the rebuild the brand new waterpump decided it was going to break, wiping out all 24 valves and scoring 3 cams. Bought a used set of heads with cams, and somehow managed to get my car back together with a week to spare in time for the texas 3/S dyno day, where I out down 343hp/356tq on pump gas, a dieing turbo, and a really conservative tune. And that brings me to now, with a howling turbo that's blowing smoke, and waiting for my new turbo to get here :-)