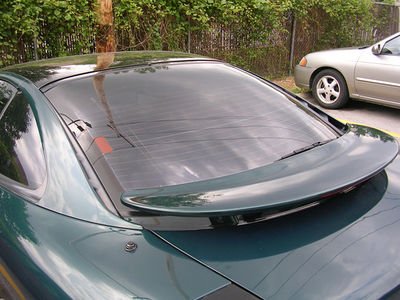 Nicknamed the "Stealth Wiper Mod" by the Mitsubishi 3000GT/GTO and Dodge Stealth community, this do-it-yourself modification allows you to easily reverse the rear window wiper arm's resting position from vertical to horizontal and thus hiding it behind the spoiler. While this mod can be performed on a either a 3000GT/GTO or a Stealth, it is probably more beneficial to Stealth owners due to the Stealth's spoiler sitting up close to the rear window, making for a convenient hiding spot for the wiper when it's not in use.

This change is great for those that wish to put their wiper out of sight and also makes for a much cleaner appearance. The other benefit of having the wiper arm resting horizontally behind the spoiler is that the wiper will now push light collections of snow up and off the rear window instead of compacting it down beneath the spoiler.

Credit for the first known implementation of this mod goes to Tim (91tt93es) of 3000GT/Stealth International.

Modify of the Rear Wiper Motor[edit]