This guides explains the vacuum hose reduction for the first generation 1991-1993 Mitsubishi 3000GT and Dodge Stealth; specifically the Federal Spec ’91-93, California Spec ’91-93, and 2G Hybrid ECU ’94-95 cars. Below are brief descriptions of the systems involved, a list of tools required to perform the modification, and step-by-step instructions for the modification itself. It is intended to be a general guide only; hose reductions will vary according to individual setups and preferences.

In this guide, we will be removing the following systems: 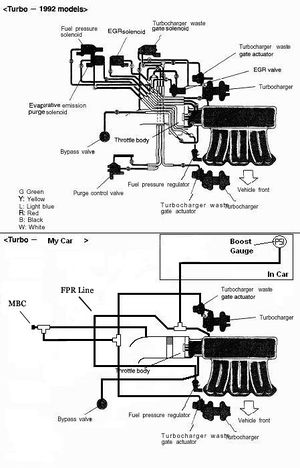 I am assuming that readers, at minimum, have:

These are listed in order of importance:

Before performing the vacuum hose reduction, it'd be a good idea to remove the following parts in preparation (which will be added back after the reduction is completed):

Note: It is possible to do the hose reduction without removing some of these things, but it is easiest with them removed.

When you begin, you'll be looking at a nest of vacuum lines and a hardline bundle near the firewall. Your stock engine bay likely looks similar to the image below. In this photo, a few lines have already been removed, but you can still see the hardline bundle and solenoid rack. The second image is an alternate, close-up view of the same engine bay -- specifically in the area around the solenoid rack. 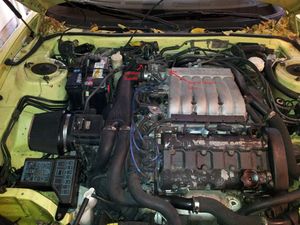 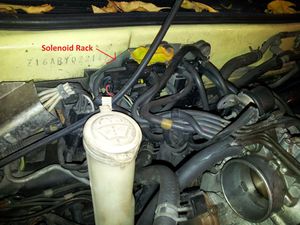 Begin the hose reduction by cutting the following:

Here is a photo of the main hoses to cut: 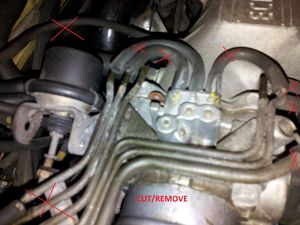 Next, you will want to: 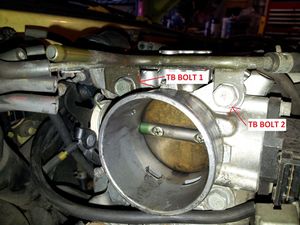 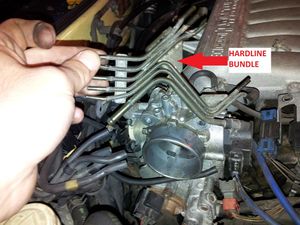 Next, we will be addressing the Solenoid Rack: 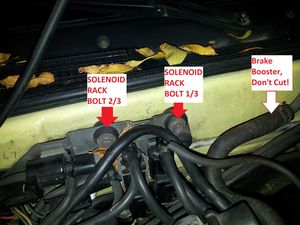 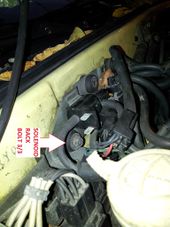 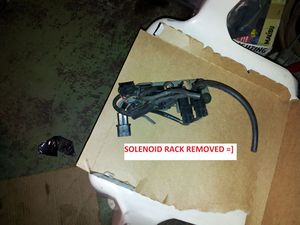 At this point there should be no vacuum lines remaining in the area of the engine bay between the firewall and the Throttle Body/Plenum. Next we will move towards the front of the engine bay so that you can remove the EVAP and valve. 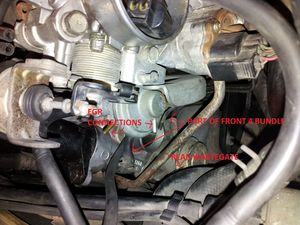 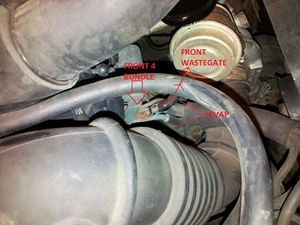 Next, remove the EVAP canister by undoing the band clamp. The EVAP canister is held to the frame rail by a metal band that uses a clasp similar to a mason jar or a ski boot. Because there are some assorted brackets and lines holding the canister itself to the bracket, the best way to remove it is to violently mangle it until it submits. Save the black plastic valve.

Further, during removal it is necessary to cut the vacuum hose connecting the canister to the hardline running from the fuel tank to the engine bay (see my quick reference above). The hardline runs along the frame rail (under the MAS), then makes a quick downward turn. It is visible in the upper right hand corner of this photo of the EVAP canister. 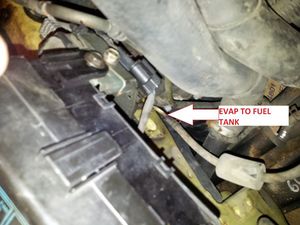 The final thing to remove is the 4-line hardline bundle mentioned in the previous steps. These are often a source of confusion for people doing the hose reductions. People are tempted to cap or connect them. All they do is connect the EVAP solenoid and Boost Control lines to the EVAP canister and the front Wastegate. Because the hose reduction removes the solenoids and the stock BC lines, this hardline bundle connects nothing to nothing.

The bundle runs the alongside the engine. They begin beneath the EGR valve, turning down under the throttle body. They run under the thermostat housing and under the coil packs. They terminate about 3 inches away from the front Wastegate Actuator diaphragm. 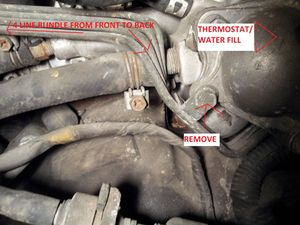 It will require some yanking and bending to remove. Do not expect it to slide out instantly.

Now that everything is out, prepare to install your own vacuum lines.

The Fuel Pressure Regulator (FPR) must see vacuum and pressure to function properly because it increases or decreases fuel rail pressure according to manifold pressure. The most direct way to connect the FPR is to use the large forward-facing port on the plenum. Notice that the nipple sizes are not the same. 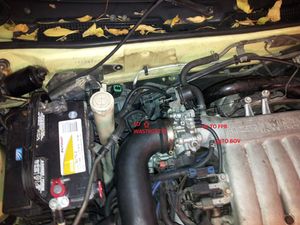 As you can see above, the cleanest method of connecting the FPR to a pressure/vacuum source is to use a plastic T: Plenum port-T-FPR. Not only can you get a plastic T with differently sized ports to solve the nipple size problem, but you can also then run a vacuum line from that T to the Blow-off Valve (BOV), which also requires a vacuum/pressure source to operate properly.

The Wastegates do not need a vacuum signal; they need only a pressure signal.

My preferred method is to run lines from the Wastegates to a T located roughly near where the thermostat housing is. Make these lines equal length and as short as possible. Be reasonable: do not make them so tight that you can pluck them like guitar strings. Run a line from the remaining port on the T to the Manual Boost Controller (MBC) or Boost Control Solenoid (BCS), depending on your setup. This portion of the house routing is unique. Place the MBC or BCS wherever you prefer. Mine is on the firewall.

Finally, connect your MBC or BCS to nipple on the back of the Y-pipe. Usually I just attach an excessively long line to the MBC or BCS "in" port until the very end, and then cut the line to length once I’ve installed the Y-pipe.

Because the EVAP canister is out, gasoline fumes will now vent into the engine bay, which is less than desirable. There are 2 easy options:

I prefer this second method because pressure does not build in the tank. Ultimately, the best way is to remove the rock guard, cut the hardline back at the tank, and remove the hardline entirely.

If you have a boost gauge, connect it to a vacuum/pressure source -- such as the nipple on the back of the plenum. If you have other switches or units (hobbs switches, MAP sensors), it is now a good idea to connect them.

To prevent intake tract leaks it is important to cap all unused nipples. There are two on the pre-turbo intake pipes:

For the rear, use a vacuum cap (I like to slather a little RTV on there too). For the front, you may simply use the EVAP canister valve because it defaults to the closed position.

If you'd like to get a little more advanced, I suggest you fill the port with RTV or, if you wish to be challenged, find a vacuum cap in that size that seals well. I prefer the RTV.

Additionally, cap the nipples on the throttle body.

If you have EGR blockoff plates, install them now.

Reinstall the intake piping and the coolant reservoir. It will likely be much easier now. Ensure that you do not pinch the Wastegate signal lines.

At this time, you will also want to connect the BOV. If you removed the BOV with its stock vacuum line attached, and it will reach, connect it to the T between the large plenum nipple and the FPR. If the line will not reach, simply make a new one.

Similarly, you should remember to cut to length and then attach the MBC or BCS to the Y-pipe nipple.

I like to approach the hose reduction with a hack-and-slash disregard for the engine bay. Remember that it’s all just hoses and systems that are unnecessary anyway. There’s nothing to “break” or damage unless you cut wires or a coolant hose (and for that you have only yourself to blame).

It seems a little senseless to me to do a hose reduction and not install EGR blockoff plates, a Manual Boost Controller (at least), and an inexpensive boost gauge at the same time. If you’re committed to the hose reduction and to an emptier engine bay, blockoff plates are a small price to pay. A boost gauge is a must for any turbo car, in my opinion, and if you’re comfortable enough with your engine to be performing a hose reduction, you probably intend to run more boost at some point or at least have an interest in how your engine is running. And, lastly, an MBC is 20 dollars. Doing the hose reduction without installing at least an MBC and gauge requires that you retain the stock BC lines and the solenoid rack, or that you connect the WG directly to a pressure source and run WG pressure (6psi).