What are Valve Stem Seals (VSS) and why would we want to replace them?[edit]

The valve "stem" passes from above the head, where there is a lot of oil, into the intake and exhaust tracts. When the seals get old, they become brittle and lose their ability to seal. Then oil can leak past the seals and get to the combustion chamber and exhaust, resulting in smoke out the tail pipe.

This article will give some ideas on the steps needed to replace the seals. Hopefully there is enough information to help you decide how you want to tackle the job. For now, there will be no discussion on how to remove all the necessary engine accessories etc to get to the seals. It will be assumed the engine is already opened up.

There are probably 4 different basic scenarios: 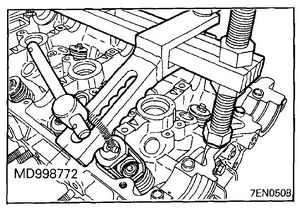 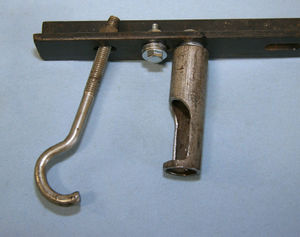 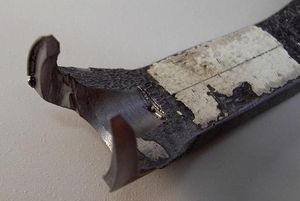 Depending on which method you use, the type of tool will be different. Here are some examples. We can add more tools to this section as we come across them.

If the heads are removed, then using a C-type valve spring compressor would probably be the easiest, because it would allow both hands to be used to remove (and later replace) the tiny keepers.

With the heads attached, one option is this special Mitsubishi tool. It would also allow two hands to remove and replace the keepers. The disadvantage is the high cost of the tool, unless you can find one to borrow.

Another option a tool you can purchase is this specialized one from SnapOn: : GA317, Remover/Installer, Metric Valve Keeper. (Description from SnapOn ad: Quickly removes and installs valve keepers on most overhead cam engines with valve stems from 4.5 to 7.5mm. Push or tap tool with a hammer to remove valve keepers. A magnet in the tool body captures the keepers for quick removal and valve disassembly. To install keepers, load keepers then push or tap to install. Can be used on the vehicle or on workbench.)

Note that this tool will require you to push down on it with enough force to compress the valve springs. This may be easy if you have a good angle on it, wearing gloves etc. . . there is also a option to "tap" it with a hammer, although that might require good technique. I think if this could be rigged to a lever somehow, it would make the job very easy.

A thread describing how to use it: : Tool Tips - removing valve keepers

Some examples of homemade tools. One of them is very simple to build, and uses a piece of pipe to press against the valve retainer. The picture to the right shows an example of an alternate to the piece of pipe. It is harder to construct, but would allow the springs to be compressed without removing cams from the engine.

After doing some research on the various methods and tools, I decided to take the route suggested by this thread posted to forum by OthercarisaFiat: : Valve Spring Compressor for $15

I suggest you read the first couple pages of this thread to get some background. Much of what is shown in this instruction might assume that you already know some of the info mentioned in the thread.

OthercarisaFiat used a homemade tool to change his seals IN the car. I used a similar tool to change my seals with the engine on a stand. The biggest difference of course, is that I had no clearance problems with firewall/radiator etc.

Starting on about post #90 of the thread some members (primarily Cbatters and skunkworks) have worked some kinks out of replacing the seals without removing the cams. This is a very interesting way to do it, but will not work with the homemade tool shown here. It will take a tool that can "reach around" the cams to depress the valve spring. Since I already had the timing belt etc. removed, it was easy to remove the cams, so a simplier (to make) tool was my choice. It only took about 20 minutes for me to make the tool I used.

In my case the tool was free, made from parts in my steel bin. It looks a little different from OthercarisaFiat, but the concept is the same. Biggest difference might be that I used holes spaced about 4" apart. I found that easier to maneuver the pipe section while removing and installing the keepers.

Before starting, you may want to stuff something into the oil drains in the heads. You would not want to drop any of the keepers down into the depths of the engine.

Don't forget to remove anything that you stuffed into the drain holes.