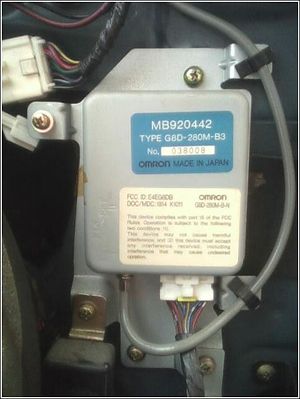 Keyless entry computer from a '95 VR-4. If you look closely you can see the labeling for the switch for "Set 1" and "Set 2".

Keyless entry is a convenient feature that was added to the Mitsubishi 3000GT/GTO and Dodge Stealth in order to allow owners to easily lock and unlock their doors without physically inserting a key.

In order to reprogram or replace the keyless entry system, you will need to access the wireless receiver located behind the rear, driver-side panel near the factory speaker. While the receiver is fairly easy to access, any car audio installation shop should be able to help you reach it as well. 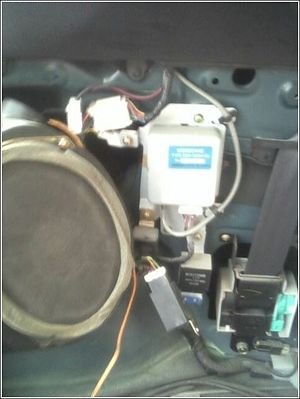 Factory keyless entry computer in relation to the speaker and seatbelt harness.

Note: This section is currently under accuracy review. Please check back for updates soon. 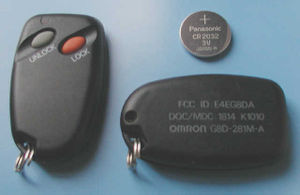 Keyless entry remote for a 1995 Mitsubishi 3000GT and Dodge Stealth

* These remotes and receivers will work in either application.

These are claimed to work but do not work:

Even if your 3000GT or Stealth did not come with the factory installed keyless entry system, there is a possibility that you can install one on your own. Community member Dave57 mentions that he took apart a 1997 Mitsubishi 3000GT SL that had no receiver and found that the plug was there. He claims that you can put the later receiver in the earlier car and it will work all but panic.

Dave57 goes on to say, "I'm sure I can run a wire and trigger the alarm with this, but there is no wiring diagram for this circuit in the resources I have. So you would have to use a meter and check the receiver pins while activating panic. Hopefully it is a grounding circuit so the hatchback switch wire would work."