Like most cars, the Mitsubishi 3000GT/GTO and Dodge Stealth has a buzzer that sounds when the keys are in the ignition and the driver-side door is open. This was implemented to remind us not to lock our keys in the car, but to most, this sound is just an annoyance. With that said, disabling the buzzer (either permanently or temporarily) is easy to do and can be done in about 5-10 minutes. Best of all, this mod is free. 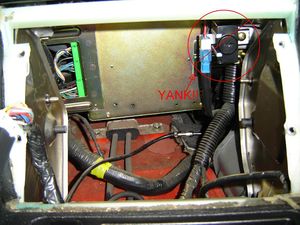 If you are still using the stock headunit, and if you disconnect the power to the headunit, it may require a 4-digit security code when you plug it back in (as a theft deterrent 'feature'). If you've been given this code in the past, you may want to find it now. However, if you don't have it, it is possible to retrieve this code from the Mitsubishi dealership over the phone or in-person (by providing them with your stereo's part number and serial number). It should be noted that not all year/model OEM headunits seem to require a code, and is more commonly found in headunits included in the 3000GT as opposed to the Stealth.

Note: This method retains all of the other door ajar functionality, such as the interior dome lights, etc. It only disables the buzzer itself.

Sometimes you may be working on your car and just wish to disable the buzzer momentarily in order to retain sanity. To disable the door ajar buzzer temporarily, simply put a piece of electrical tape over the driver side door's doorpin (located in the lower-right side of the door frame).