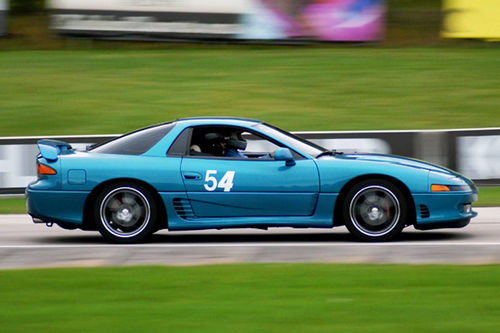 I was the chick who took auto in high school but was not a tomboy by any means. I first fell in luv with the second gen 3000gt when I was fifteen. However, my dad being hard core union wouldn't allow any foreign cars for me. Since I was a newb, I didn't realize the stealth was the loop hole to this problem, but my bro two years later did. My dad was in for quite the surprise when he popped the hood on the '94 SOCH. I learned to drive stick on that car. So since 2002, I've seen it all mostly because of my bro, maddog, from numerous tranny rebuilds, a prototype front clip, his RWD stealth conversion, 60ks and 120ks, and various other maddog specials. Sorry some secrets stay in the family. As soon as I was out of college, I saved up for a VR4 of my own.

In Nov '07 I believe, DaveSlow came across her on craigslist. I was having coolant issues with my DD at the time and looking for a replacement. Dan and I checked her out in Jan in boofoo Indiana and realized she needed TLC for she was sitting for at least three years and didn't run. The guy said it was the stock fuel pump but that was a first for my brother. Bigpete was the only person we knew who had every came across this issue. We left that day with mixed feelings and all i could do was save up more money.

In March '08, we decided to go back and if we got her running, the guy would knock a grand off. So after three hours of sleep, (3s house party the night before), on a very rainy and cold sun. morning (our hands were bright pink) we put in pezcore's stock fuel pump, which was in daveslow's garage. (Thats how chicago 3s rolls) That seem to do the trick despite the bald tires, three year old gas , (which equals clogged injectors), and a dead battery (ran to autozone for that). It took three hours to wake her up but two months to bring her back to life and running healthy in time for NG'08. She hit 50k miles on the way home that day!

Since then, stealth316 has become my bible and I try to do as much as I can on my own (despite my tiny arm muscles). Now she's up to 75k in the last year and a half, been to NG twice, BRG, UMG, MOD, and many more mini-meets/races. Road America was October and I have never looked back. I'm addicted. Road coursing is my future. I was lucky enough to get her on autobahn cc before winter started. I can't wait for March and a new race season to start.