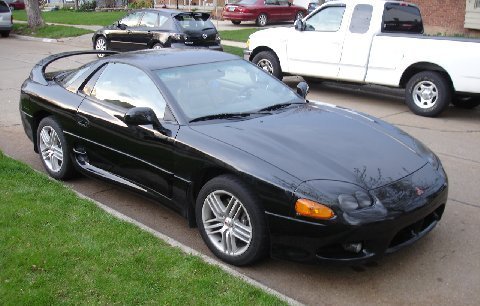 Ride of the Month Submission 3000GT/Stealth International May 2009

Hey everyone! Thank you for taking the time to look at my wiki. I want to start off by saying that my name on the forums is Boost4VR4, I am Kevin Pierce in the flesh and blood. I started getting into the import car scene back in 2003-2004 area when I owned a DSM. At the time, my mother had a Dodge Stealth ES and previous that she had a Stealth RT. She was in W3SI and was at the 2004 Upper Midwest Gathering and I attended UMG with my friend and if the guys remember UMG 2004, we were in a white Honda Civic hatchback cruising along with all the 3/S owners. I found out first hand what the people of 3SI and each individual chapter are all about. 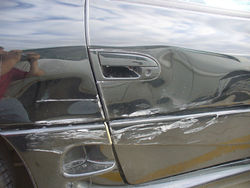 Hit on the passenger side

Since then, I have always wanted my own 3/S but I had my sights on a Twin Turbo model. Five domestic cars, and 4 years later, I found the one that I couldn't pass up. I would become the second owner of this car and it had somewhat high mileage, but it was meticulously maintained and I decided to plunge into the 3/S realm for the first time. When I went out to test drive it, I told the guy that I had never owned a standard transmission vehicle before, this would be my first manual transmission vehicle I have ever owned, with that dilemma he was faced with, he said, he would take me out for a ride in it to show me what it's capable of. I was blown away by the performance and feel of the car and I instantly told him I wanted it and I will be keeping in contact. So for the next 1 1/2 weeks, I frantically seeked out a loan and finally purchased it.

I finally got it and I had the guy drive it down and I would drive him up in my current car.

About a month after I had owned it, I took it to work and it was hit on the passenger side. I had purchased a bunch of parts to be put into the car while it went in the body shop for repairs. Thankfully I didn't have to pay for the damage since it wasn't my fault and my workplace's insurance covered the damages.

I have always taken really good care of her, and I continue to do so. I put in some appearance modifications and some other modifications into the car:

There are a lot more pictures of my car on Cardomain: