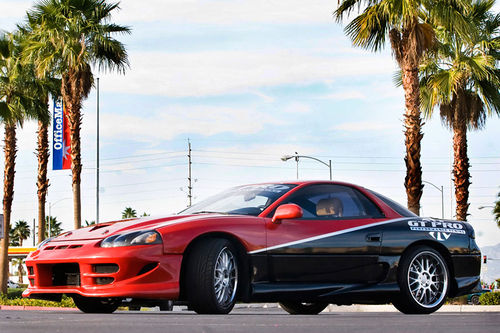 It started with my dads 92 stealth ES back in 99, I thought it was so badass and it was sexier than a viper (exaggeration? maybe). I was 11 and always wanted to ride with him, eventually in 02 he bought a 94 Stealth R/T and that was even more fun to drive. I was 14 so in 03 when I turned 15 he decided to teach me to drive. Shifting in gears and mashing the gas was more fun than playing Final Fantasy 7 (okay, maybe not, Cloud rules). When I turned 16 in 04 and got my license I decided to buy the Stealth from my dad, and for over 2 years I slightly modified it and gave it a nice paintjob, until I turned 18 and realized I needed more.

When December came around I decided to get a VR4, I thought they were as sexy as Jessica Alba on a good day, and that's saying a lot. I came onto 3si and was offered a deal from Denis at GTPro or Chauncy (he was thinking of selling his car to me). I took Denis up on his offer and he began modifying a beat up 91 VR4 into the wonderous beast you see before you. About 6 months ago in March he arrived with the VR4 finally done. I was so happy I left my birthday party and a tear came to my eye when I saw the beast. I couldn't believe the upgrade from an R/T when I sat in the drivers seat and tapped on the gas. I've had it since March of 2007, and I've gone to MOD 07 (was at the 5 Zigen booth) and WCNC 07, both rocked, met a lot of cool people. I'd like to thank Denis for working on my car and making it what it is today.

Soon to have the upgrades put on it for another 100 HP at least, going to dyno it and see how much it puts it :) It's already a few hundred pounds lighter from the body work alone. Thanks for looking! This car is my wife.

Thank you Jonathan Craig for lots of the pics :D

Working on my cars webpage :)