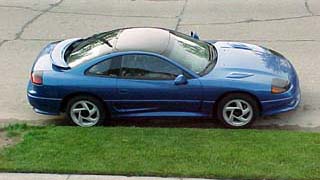 My father used to work at the Chrysler Tech center. When ever new cars were coming out he bring home paper work describing the new cars or pictures oft eh new models.

I saw the Stealth and I was in love. Unfortunately, the car was way out of my price range. But, I said some day I'll get one.

In 1998 many years later and several cars later (A Daytona and a Avenger (oops)) It was time for a new car. I wanted a Sports car. But, Living in Michigan I wanted a AWD car. Between the desire for AWD and my budget i was limited to a first gen stealth or a dsm.

So car hunting my wife and I went. dealership after dealership and nothing worked out. First a talon was literally sold out from under me, A stealth RT that smoked a bit too much. IT was just not working out. Then one Saturday were crusing down the road after looking at a AWD Celica( my wife likes Toyotas). We saw a nice blue one and my wife was commenting that she wished we could find a Stealth in that color....... As if a sign from god their she was.

Perfect condition, Purred like a lion, 47k miles, And best of all In budget. Some loan paperwork later I was a very happy man.

Now every morning I get up happy to drive to work.

She's remained stock for almost two years. In the last year I've added A K&N, A Boost Gauge and a Bleeder valve. Recently She's started showing signs of age so, Darn I have to replace the Turbos (Yippie, The Married guys will understand ).

But, I don't care I love this car. Its weird its changed my life. I was always the guy in the back of the room that kept to him self. Now I'm the nut that walks up to strangers and says "HI, I'm part of a local 3S club"