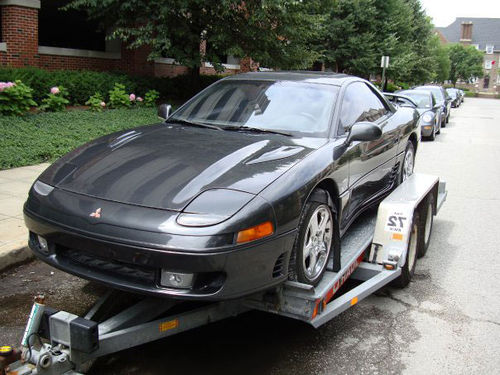 My first ever car was a 1991 3000GT SL which I bought in July of 2003 and being a student at that time and really having no money to maintain it and it always failing on me, the car was sold in May of 2004. I absolutely loved that car and I would of never sold it if it was a dependable DD. But it wasn't. After that I changed a few more cars but the love for 3/S platform never went away. So here we go...

1992 3000GT VR-4 was bought in February of 2008. As of right now I have a few DD cars and money to maintain the VR-4 so it will probably be garaged almost all the time :) The car was bought with 77k miles on it, clean title and all that. I bought it in Ohio and while driving back home, the transmission failed on me. What a bummer :( Well I was planning on doing a 6 speed conversion anyway so that didn't really disappoint me... The only thing why I got disappointed is because I wanted to drive it stock before modifying it because I never drove or have been in a turbo 3/S... oh well, may be with the next 3000GT I will be able to drive stock LOL :)))

As far as the project... I am trying to re-do the whole car. Whatever is bad I am replacing it and whatever I can get aftermarket I am getting it :)))

Here are the pictures of how the car before I started doing anything to it: