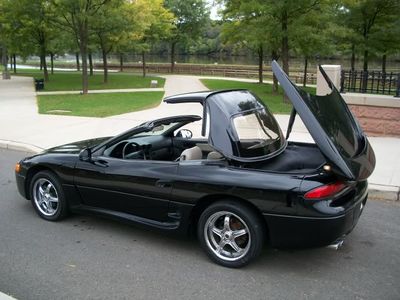 In the 1995 Model Year, the 3000GT line-up was enhanced with the addition of the 3000GT Spyder. The Spyder is the ultimate touring vehicle. At a cost of $65,000 dollars, the hard top converted 3000GT was not cheap, but was a technological phenomenon. The spyder was one of the first fully automated Hard top convertibles ever built. The SL version was powered by a 6G72 Engine coupled to a 4-speed automatic with no manual option. For the Performance fanatics, the VR-4 Spyder Continued with its Twin Turbo engine, and its AWD 6-speed manual transmission. In order to provide touring feel and handling with the approximate 400 lbs of extra weight, the Spyders were equiped with higher profile 245/45/R17 tires on 17X8.5 inch chrome wheels, instead of the 18X8.5 inch wheels that came standard on 1995+ 3000GT VR-4s. In 1995 the 3000GT also gained the Chrome 18x8.5 wheels.